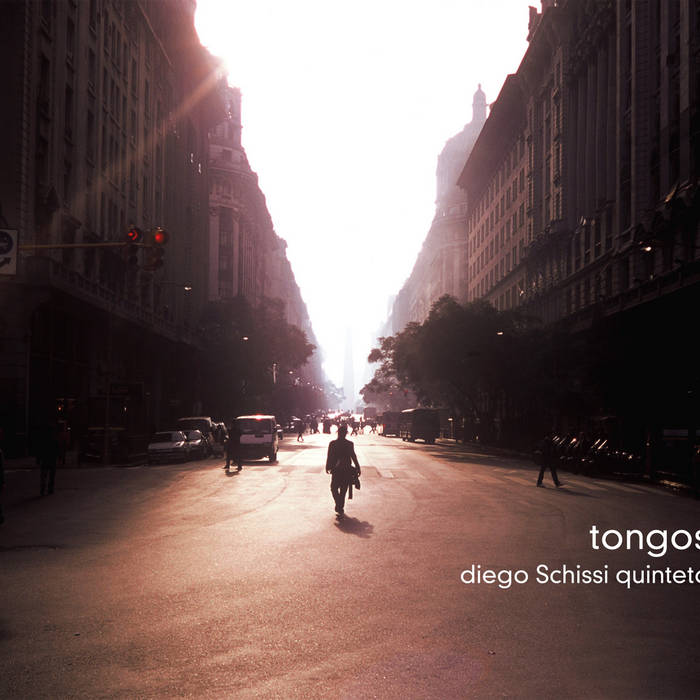 Sven B. Schreiber It's good that Diego Schissi, originally from Buenos Aires, didn't stay forever in the United States, playing jazz... we would have lost an ingenious "tango nuevo" composer! This collection of exciting tangos, milongas, and valses, subtitled "tangos improbables", is an authentic addition to the genre, drawing on the classic pioneering work of Astor Piazzolla and others. Favorite track: Liquido 5.

It is interesting how music can be so intertwined with cultural and national identity. No matter how creatively an industrious composer bends its elements to his will the music remains a part of the tradition. Some musicians see this as a challenge, while many embrace the bond. On his new release Tongos, Argentinean pianist/composer Diego Schissi attempts to create a unique form of music inspired by Argentina’s most important cultural legacy, tango.

Born in Buenos Aires in 1969, Schissi was exposed to tango but was quickly drawn to the sounds of jazz. He studied at Conservatorio Nacional “López Buchardo” and, moving to the United States, the University of Miami, where he studied jazz performance. Upon graduation, Schissi remained in the States performing in ensembles led by Tito Puente, Nestor Torres and Maria Schneider, among others.

Schissi returned to Buenos Aires in 1996. Up until that point, he had been entirely engrossed in jazz – in study and performance over a span of 10 years. Schissi began playing with his own ensembles and with the popular Quinteto Urbano. His return to Buenos Aires found him increasingly drawn to the music of the legendary tango composer Astor Piazzolla. Schissi’s focus began to shift to tango composition, a music that he had never played before.

While there is little jazz influence in the music of the Schissi Quinteto, the subtle hints of jazz set the work apart from other tango experiments. The differences are mainly in inflection and in how the musicians communicate in performance, not necessarily in improvisation, there being very little here. There is also a mindset among the performers aligned with that of a jazz musician: a raw drive to play the music, not just receive a paycheck.

Schissi’s music is a shift away from the form of tango. He chooses to “keep the energy rather than the gesture.” In doing so, Schissi intentionally keeps the traditional instruments associated with tango: bandoneón, violin, piano, guitar and bass. He does change other aspects, even if subtly. He ironically christens his music tongo and, as there are three forms of tango, there are three forms of tongo. The tango is mirrored by the tongo while the lyrical ¾ vals is countered by the canción and the cut time milonga by the liquido.

The music takes many of the elements that Piazzolla established and embellishes them with the compositional concepts that were originated by 20th century classical composers like Bela Bartok and Igor Stravinsky. All these influences combine to create a sound that is “not tango, but close.”

The Quinteto was premiered at the Festival Internacional Buenos Aires Jazz 2009 with the program “Tongos, canciones y líquidos” along with dances by choreographers Ana Garat and Pilar Beamonte. This performance was essentially a dress rehearsal for the recording of Tongos and the ensemble’s subsequent tour throughout Brazil, Chile, Uruguay and Argentina. Schissi’s achievement was recognized by the Secretary of Culture with a mention at the Argentinean National Music Awards.

Schissi’s young ensemble continues to stretch the boundaries of tango tradition that has continued to be very conservative. The work of the Quinteto has steadily become more and more popular with dancers and listeners over the past few years as many become enchanted by the beautiful and intriguing new sounds of Tongos.

Bandcamp Daily  your guide to the world of Bandcamp